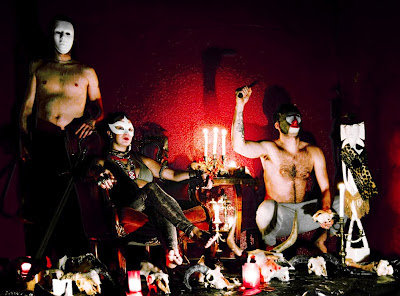 
Goat, a collective of musicians from the darkest corner of the Swedish netherworld, might very well be the most mysterious and electrifying band on the planet at the moment. until earlier this year, noone outside of their remote village had ever heard of them. they have never played a live show outside of their commune. their hometown of Korpolombolo was, according to legend, a hotbed of voodoo worship for centuries after a traveling priestess and her followers were led there by a cipher hidden in their ancient texts. the practice went on for hundreds of years until the Christian church found out what was going on and the village was burned to the ground, the survivors cursing the land as they fled, a curse which still haunts the area to this day. the band members claim that, when they were very young, the village elders initiated them into the entrancing, percussion-heavy musical traditions of their ancestors and that Goat is merely a continuation of a generations old ritual. maybe their backstory is a work of fiction, or maybe it's true. all i know is that if in fact there is a centuries-old voodoo curse coursing through the veins of the music of Goat, i wouldn't be the least bit surprised. there is something almost otherworldly about the music on their debut album "World Music," that much is certain.

the album sounds like a dusty relic from the past, and is shocking in it's scope and execution. there is always a heady mixture of exotic musical styles swirling in the air: tripped out 60's psych rock, turkish stoner funk, blaxploitation soundtracks, thick afro-cuban rhythms, scuzzy detroit prepunk, droning krautrock, indian raja, prog rock, old school west african blues, ethiopian grooves, acid folk, and straight up classic rock guitar riffs--oftentimes blended together into one ferocious mixture over the course of a single composition. these can't really be called "songs" in the traditional verse/chorus/verse sense, these are long and winding musical pilgrimages, trance inducing spells, and peyote-fed meditations. there are no musical boundaries here.

the album opener, "Diarabi," is a reworking of a song by west african bluesman Boubacar Traore. the original is an unadorned, mournful acoustic composition, but Goat turns it into a towering pillar of distorted guitars, bass, and flute, building higher and higher until it crashes in a crescendo of frantic drumming. the theme of the album is established... everything is on overdrive from here on out.

(here's the original Boubacar Traore version of "Diarabi."  there is a very interesting Traore documentary titled "i'll sing for you" on Netflix Instant Watch  that is well worth your time.)

next up is "goatman," one of the most badass tunes i've heard. ever. this is some serious ritualistic voodoo funk, built on a foundation of supercharged african drumming, menacing fuzz bass, unintelligible shouts/chants, and searing wah guitar solos. it's a blistering song and when it was originally released earlier this year as an impossible-to-find 7" single, the first time the outside world got a glimpse into the beast that is Goat, word spread very quickly around the globe that something special was being cooked up in the scandanavian wasteland. a classic.


"goathead" continues where "goatman" left off and brings it a step further into the flames, culminating in a wah guitar freakout before breaking off and breathing a sigh of relief as it comes down with a hushed acoustic coda and fades into gentle white noise.  (this video clip edits out the quiet finale, check the whole song out HERE)

special props need to be given to the editors of these videos.  a compilation of some very interesting clips from around the world.


once you think you've got these guys figured out, Goat pulls out the hard-as-nails funk of "disco fever," and everything changes. a thick, ass shaking bass line wraps itself up in latin percussion and a cool repetitive guitar lick before it twists a bit, becoming more disorientating with splatters of psychedelic 60's organ.

Goat comes up out of the steaming jungle for a bit with the straight up street heavy funk of "let it bleed" and it's impossible-to-resist body shakin' groove would feel right at home in the Rolling Stones mid-70's catalog. great guitar licks, a skronky sax solo and congas add all the right flavors. another bona fide classic.


"run to your mama" rolls in like a threatening storm with a sinister bass line and leaden slabs of heavy guitar riffs while rippling indian percussion rolls underneath. as the music settles into a disquieting drone, there is a strange solo that seems to be plunked on a child's piano or xylophone. ominous stuff, and when the singer belts out "lightning in the sky/boy, you better run to your mama now" it sounds like good advice.


the album closes with three tracks that merge seamlessly into one. the restrained acid folk of "goatlord" begins the piece and bleeds into the funereal organ hymn of "det som aldrig forandras" which builds steadily into a mesmerizing cosmic drone, spiraling up towards enlightenment as it finally circulates back to "Diarabi," the opening track, bringing it all around full circle. it's a breathtaking piece of music.


"World Music" is one of those rare albums that grabs you by the shirt collar from the first note, lifts you up off of your feet and backs you up against the wall and there's not a fucking goddamn thing you can do about it... and considering it's Goat's debut recording, it is an all the more impressive feat. this is an absolutely electrifying record, fresh and compelling with unrivaled intensity, and is hurled through your stereo speakers like a much needed revolution-sparking molotov cocktail. for the musically adventurous: buy it. now. 10 of 10