After a blistering run through Europe's most prestigious summer music festivals, the Swedish tribal psych collective Goat have a growing number of fresh converts following in their wake.  Though only a live touring entity for less than nine months, Goat's performances were among the most talked about from their respective festivals, oftentimes staking their claim amongst some of the biggest and best bands in the world (watch their full Glastonbury performance HERE and the full set from Roskilde HERE)

HEAD MEDICINE recently checked in with the band to find out more about these stunning shows.  one thing is obvious after sitting down for a third time with the notoriously press-shy group:  Goat lives and breathes inside its own impenetrable bubble, unaffected by the fleeting whims, tastes, or demands from the outside world.  They are anchored by an unshakable self confidence and a genuine love of living in the moment, communing through music with each other and anyone who happens to be in attendance, whether it is 150 people in a small club, or tens of thousands at a major festival.  Their expectations and ambitions are unusually humble.  Goat will be whatever they want to be for as long as they decide.  Any future success will be on their own terms.

HEAD MEDICINE:  Goat's reputation continues to build after a series of high profile European festival appearances, including Primavera in Spain, England's Glastonbury, and Roskilde in Denmark.  by many accounts your performances were  among the best of those weekends.    are things just getting surreal at this point with all of this growing attention and praise?  any particularly memorable or unreal moments over the last few months that would have been impossible to imagine one year ago?

GOAT:  Well, that we were gonna play any of these festivals never crossed our minds one year ago but we are happy and thankful for the opportunity to do so. It has been amazing for sure. And I also think that the US tour improved our live set and has tightened us together as a live act so that these shows afterwards have been the best we've done live so far. But I'm sure we can still find new ways to develop live also, with new material and so on. But it is not in any ways getting surreal really cause you have to understand one thing, this is not taking over our lives. We keep our minds pure and simple and our feet on the ground. We know what is important in life and we just try to have a good time and enjoy the ride. If it ends tomorrow we will be just as happy. With that said I have to admit that playing that day time show at Glastonbury seing all those people was something out of the ordinary.


HEAD MEDICINE:  i would like to talk about the Glastonbury performances. the daytime show on the West Holts stage was your most high profile live show yet in front of your largest audience, many of whom had never heard your music before, and filmed from every possible angle by the BBC.  be honest, did you guys feel a bit more pressure with that show?  did you treat that performance the same as a small gig in a dark club, or did it require a different kind of preparation?  i am curious what kind of thoughts or emotions were running through you before/during/after that performance.

GOAT:  It was no difference in preparations or pressure. We can only do what we do and rely on each other. And play as good as possible. Actually we were very calm before that show as far as I remember. We discovered that there really is no difference playing small clubs then big festival stages. But it is fun to try both when we get this opportunity.


HEAD MEDICINE:  later that night you performed a second set on the Hells Stage in Shangri-La, and the previous evening, you blew up the Electric Ballroom in London in front of a bloodthirsty crowd of Goat fans.  what are the pros and cons to large daytime festival performances vs. smaller and more dramatic nighttime/club gigs, and a crowd who is familiar with your music vs. a mass of potential new converts?

GOAT:  I don't know. For me it is the same always. I feel no difference really. And I know that it is the same for everyone in the Goat band. It is just music and for whom or where you perform it doesn't matter as long as people enjoy it. If people were not enjoying it we would stop playing live I think but for everyone it is a nice feeling when you get this spiritual exchange of energy with the people listening and dancing. That really turns us on. We were not aware of this experience until we started to play live last year.


HEAD MEDICINE:  your Roskilde performance was notable for having a new member on stage playing keyboard, sax, and, harmonica.  he added an entirely new dimension to Goat's live show, and i was especially impressed with the addition of a harmonica solo during a blistering rendition of "The Sun The Moon."  will he be coming along on any future Goat tour dates or was this a one time thing?  was he by chance the guy playing keys and sax on World Music?

GOAT:  No he is not playing on the album. He is a long time participant in Goat born and still living in Greece. He travels a lot and plays with various groups around the world. He has done one show before with us at Stora Teatern in Gothenburg December last year. He will be with us when he has time or feel like it. He is great playing with, you never know what he is gonna do. The harmonica part on The sun the moon was never rehersed for example.

HEAD MEDICINE:  outside of Goat's live performances, are there any new song ideas bubbling to the surface?  is the band getting the itch to retreat back to the studio and cook up some new tunes or is everyone looking forward to some extended time off before considering new material?

GOAT:  Yes. We will start recording in September. Everyone is really looking forward to this more creative process again.


HEAD MEDICINE:  looking back, how do you feel the band has evolved over the last year since the release of World Music?

GOAT:  The live group is a more tighter musical unit now and we have learned how to play our songs good and with no stress. So as a live act we are much better now then last year. But Goat as a spiritual and living community, or as a musical creative collective, hasn't changed at all. Music shall be treated with joy and simplicity, use your ears and your heart and don't give a fuck about anything else. Loose your mind, stop questioning, thinking, and all that stuff. Are you enjoying the sounds you hear? Are you experience anything? Feeling something you like? Then it is enough. That is the principle we live by when we make music.


HEAD MEDICINE would like to thank Goat once again for their time.  tune in this fall when we check in on the recording of their new album.  should be interesting. 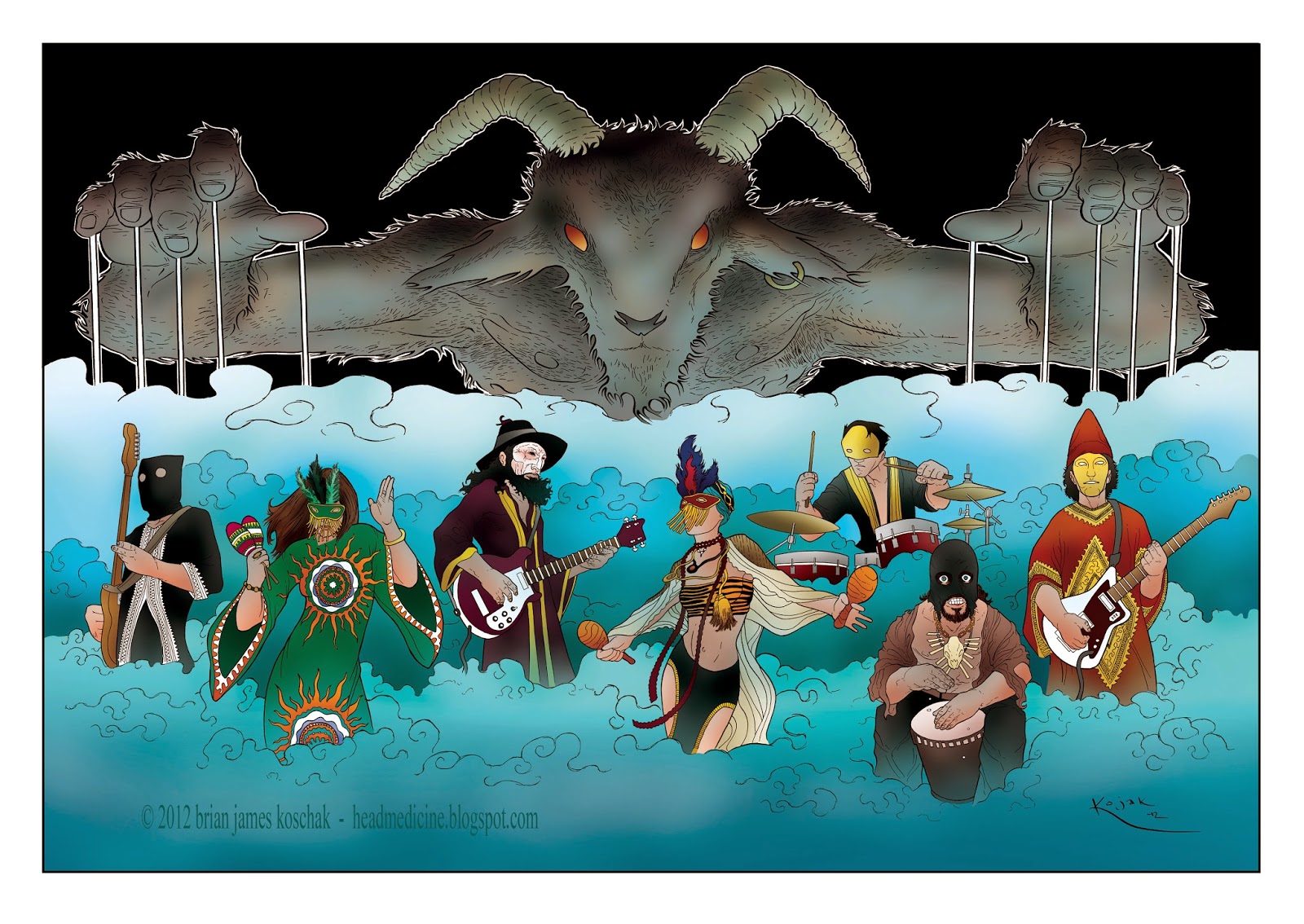 HEAD MEDICINE has all of your Goat needs covered.  the most complete online collection of exclusive interviews, album/live reviews, audio/video, links and more HERE